Hey y'all,
So this week, was full of ups and downs on the rooftop. On the upside, I have been very happy with the rate of production for just about every plant and have been amazed at how little I have had to deal with pests and disease. On the downside, since this was my first year growing sunflowers (which are my favorite kind of flower), I did not plan well for succession planning. I was imagining that the sunflowers would come in and then I would spend the rest of the growing season basking in their glory.

I am going out of town (again, I know) for a little less than a week starting next Wednesday for a family reunion. There, I will review the flower seeds that I have and see if I can develop a succession plan to always have a sunflower blooming indoors under my growlight. When I return, if my sunflowers on the roof haven't developed their seeds, then I am going to have to pull them up and give some room to some of the other smaller flowers in the containers to grow.

To end on a high note, I have been able to get about 10 strawberries and 2 tomatoes a week from the current plants on the roof and it looks like they are all starting to produce way more, so that leaves me fat and happy. Please see more detailed updates of each container after the jump.

Sweet Potatoes in DIY Container A 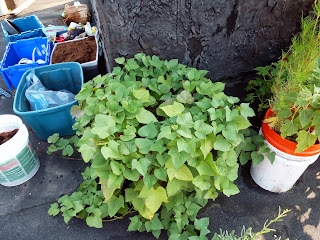 Everything is looking good in this container. The color seems just about right. It is interesting that the leaves coming in are larger than the older ones.

So this container is bringing me the most happiness as of late. First, the corn seems to be a little ahead of schedule in terms starting the pollination process. Up top, you can see the tassel (male) coming in and this week, you can see the ear (female) developing. Soon, I will shake the stalk to ensure that pollination happens. Ideally, there would have been more than 4 stalks in the container and then nature would do it's magic. After a comedy of errors, I ended up with 3 stalks.

Below, you can see fruit starting to form. What kind of fruit you ask? I have no idea. I only have three kinds of squashes and as I did not purposely put this seed in this container, I have no idea which kind of squash it is. Currently, it looks a little too fat to be a Black Magic Zucchini or a Yellow Straightneck, so I'm thinking that it is probably a Spaghetti Squash. We will soon see. 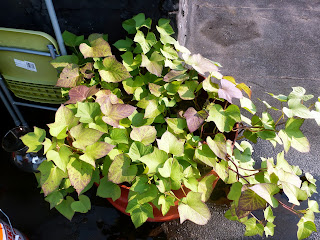 Here, there seems to be a little coloration issue. Maggie, my all-knowing Farm Director says that this can be either one of two things, either a nutrient deficiency or the sweet potatoes beginning to form. The newer leaves coming in are green, though so I am not too concerned. As I didn't put as much soil in each container as I should have (being cheap typically ends up costing more money in the end), I am making a compost tea to spray on the leaves and to add to the soil for this container and most of the others. In early September, I will add some bonemeal to the sweet potato containers, as well. 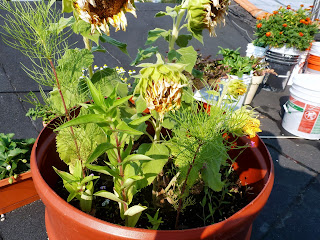 See above to understand the heartburn that these sunflowers are giving me. They have two weeks to show their worth!

Same thing happening here as above. As this container is much smaller, there is more of an impetus to take out the sunflowers if they are no longer performing to allow these flowers to thrive. As these flowers are supposed to attract hummingbirds, I would really like to see if they perform as promised.

German Chamomile has to be the oddest growing plant. For weeks, it barely looked like it was growing and then over the last two weeks it has really exploded. I'm loving the home-grown Chamomile and Lavender tea at bedtime. Strawberries are still producing. I am going to start trying to capture some of the daughters so I can expand my strawberry operations for next year. 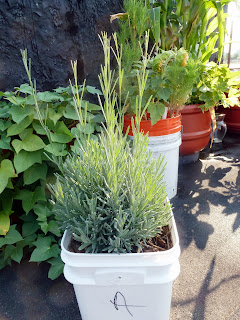 I was told that the Lavender would not flower this year, so I am excited to see that it is. I have been using the leaves in cooking and tea. 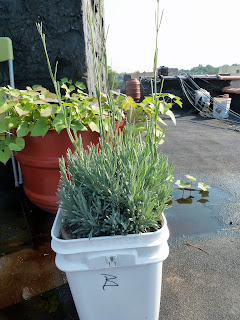 Same here as above. 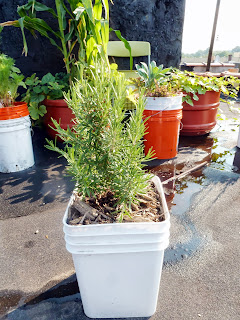 I am loving this herb in the kitchen. It is growing so beautifully. I am excited to prune it in the fall to get some seedlings out of it and hopefully have something that resembles a Christmas Tree to serve as mine! 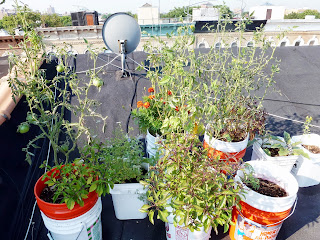 After a little time to rebuild after the plants went a little long without water, they are back in action. The cherry tomatoes are adding about a tomato a day. As they are all really green now, I am scared that they will all ripen while I am away providing my "sous waterer" with an abundance (your welcome, Heather). I am also promoting a lot of growth with the Thai Basil as the aforementioned Heather is finding a multitude of uses for them. Before I leave for the family reunion, I will have to make sure that I carefully apply the compost tea to the leaves to promote further growth. 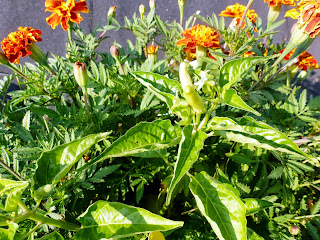 All of the pepper plants seem to be doing really well. The mystery pepper is starting to fruit, so soon the mystery will be solved. The other peppers are attempting to flower, but I am picking them off daily to ensure that the plants grow taller. The Basil shows the mistake that I made. I typically like to use soil for herbs without any additive so that the leaves are compact and intense in flavor. This Basil has larger leaves with less favor. A reminder to pay attention when planting or to just plant everything in cohorts with similar needs.

The mint does not seem to be growing as quickly here, but there might be a lot of root action happening below. Hopefully, the compost tea will speed things up. I am not sure why I have not been eating as much of the leafy greens lately, but will hopefully correct this error this week. 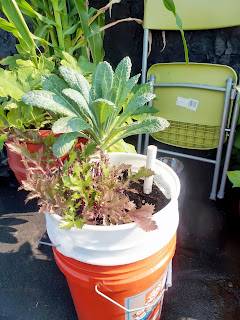 The Kale is growing surprisingly well as it is not a plant that normally thrives in the summer. The Purple Mizuna was harvested last week to serve as a bed for a dinner of lavender/thyme/rosemary roasted chicken which was delicious. I will try to include the recipe and pictures when I have some downtime during the family reunion. 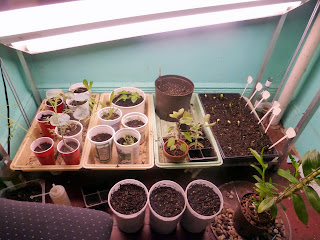 Things are going really well here. I composted much of the plants that were awaiting transplanting as I was too confused which plant was which. This time, I have each clearly labeled, so will be planting three kinds of squashes, cucumber, and two kinds of beans/peas in the near future. I am trying to get back to a system of having half the space filled with germinating plants and half with herbs and lettuces. I am slowly getting back to that mix. 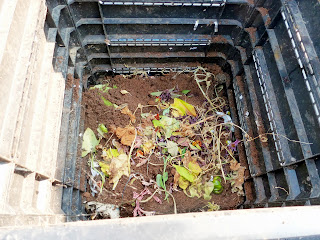 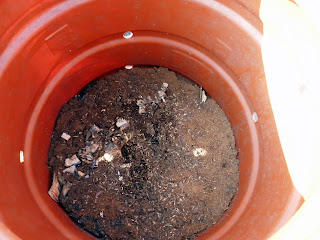 Here, I am having some issues as I have not been watering the compost as much as I should so neither have been able to reach hot temperatures for more than two days in a row. I am going to find some straw to use on top to reduce some water loss, but for now, I am accepting that both piles are going to be slow piles.