While the Memorial Day weekend is normally seen as the "official start of the summer" here in the US, this year it was crazy cold outside, which meant a weekend of cookouts turned into a weekend of garden projects. First up was going to the post office to get the sweet potato plants that arrived on Friday. Getting plants in the mail is always nerve-racking (will they make it in time? what if they get lost in the mail? will they be able to handle a week in transit?!), but this time they arrived looking fairly normal.

So, first we should do a little fun fact. Sweet potatoes are tropical vine which are actually more related to peppers than "regular" potatoes (fact check it! http://en.wikipedia.org/wiki/Sweet_potato). As such, they will die if the weather gets below 50 degrees. Since it was crazy cold here, I decided to give my plants a little TLC before putting them out in the big bad world.  Here's how I did it. 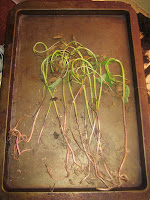 First, I separated each plant and composted the rest of the material that they were sent with.

Second, I filled up some easy DIY containers with organic seed starting mix with a top thin layer of worm compost (which, I think has magical powers in the garden). Some add sand here too as drainage is really important for sweet potatoes.

Third, just simply eased the plants into the soil and put the container under the growlight. Ive found that a super easy way to make a hole for the plant to go into is just to use a pen to make the holes.


Fourth, water water and water again. When using a new container, it often takes a couple times for the water to make contact with all of the soil. I tend to water three times in 15 minute intervals allowing all of the excess water to exit through the bottom. Water is very important especially for mail order plants as they tend to be a bit wilted and the water will fix that.

Sixth, put the plants in a window sill or under a grow light.


On Monday, we finally got a nice day outside so I took them out during the day and brought them back in at night. Ill continue doing this for the next week before I finally plant them outside.

Thanks so much for reading!
- Monti
Posted by Unknown at 1:41 PM